Do sounds have meaning? A question ignored for centuries could hold the key to understanding how language emerged, and what it is. In this first part, Juliana introduces you to a few misconceptions in Linguistics, and the idea that maybe, just maybe… sounds may carry in them the essence of the entities they describe.

Hello and welcome to Language with Chu. It’s been a while and I’ve been doing quite a bit of research, and I recently gave a talk at a polyglot gathering about the topic that I’m about to tell you about. I had to shorten it so much because I only had half an hour to talk about it, so if you were at the Polyglot Gathering 2021, you might have already seen the gist of it. But this series of videos will expand on that. If you weren’t there, then it may all be new, or you may already have some ideas.

But it’s something that, I should tell you straight away, you won’t find in Linguistics books. You won’t even find it when you’re talking with friends about language really, or in any kind of mainstream book about language. It’s kind of specific and it took me a while to find it, actually. You have to pick at different clues.

But basically, it’s about the question, “Could sounds have meaning?”. Normally (and I’ll start with my slideshow in a minute) you don’t think that the letter “t” or the vowel “e” have any intrinsic meaning, right? What does “e” mean? Well, nothing, right? Well, maybe nowadays we don’t see it like that, but perhaps they used to have a meaning…

In fact, Socrates (so we’re talking about Plato’s writings, this one was from like 390 BC)… There’s a really nifty text called “Cratylus” where he talks to… Socrates talks to two philosophers, and they’re arguing about whether language is purely arbitrary, a convention, or whether the act of naming things has something to do with reality. So, do sounds convey something? And he puts it beautifully. He says, “well, I think that our ancestors created names, started naming things, created language, because they were perceiving the essence of things”, just as a painter is looking at a landscape, say, and he or she will choose the colors and materials and textures to portray what he or she is seeing. And it’s a way to “signify”, to represent what he sees about reality. Obviously, the portrait or the drawing is not the object itself, but it tries to catch the essence of what the object is. And Socrates says that, basically, language could be a bit like that. That originally, people chose certain vowels or certain consonants because they showed the essence. Something softer may have one consonant, something rough may have another one, etc.

Well, it sounds kind of crazy but I’m finding more and more that there may maybe some clues there. So let’s begin by looking at this diagram:

It’s very simple. That’s how usually Linguistics sees the word. Ferdinand de Saussure is a linguist from Geneva. He was writing this in 1916, I believe. And he’s one of the fathers of Linguistics. I myself studied his theory when I was at university. And one of the things he says, is that for every word, every “sign”, you have the “signifier”, which is the word, the characters, letters and sounds that you pick to depict that object. And then you have the “signified”, which is the actual concept or object. So, I think of a tree, and I say “tree” in English, but not in Spanish. In Spanish it is “árbol”. So each language would have chosen specific sounds to depict an object, right? So far, so good, and nobody really splits it up. Nobody, as I said, tries to figure out the meaning of the /t/, the /r/, etc. So, usually we leave it at that. [And it’s all supposedly arbitrary, a convention.]

But in fact, when you think about nature, there’s something very interesting:

Why would we see that 26 to 100 atoms (depending on who you ask) form all matter in the universe, and 20 amino acids only form life of all kinds, from a plant to a human being…? And then in languages, we also have that for each language, there are about 20 consonants and 5 vowels (in average, of course). So each one of them goes on to form bigger organisms. From the atom, you get molecules; from the amino acids, you get proteins, which then compose cells and the bodies and every organism in existence; and then from languages, you start off with those little pieces (letters and sounds) and you end up with entire languages, spoken and written.

So there’s some kind of parallel there, even though I’m obviously oversimplifying things, and it’s not necessarily exactly the same. But we could find more comparisons just by remembering that sounds are the smallest “molecule of language”, say, and they usually kind of get ignored.

When you study Linguistics, usually you break down the subjects into these six disciplines:

You have Phonetics, which is all the sounds in the world, the human sounds. And you study a bit about how humans are made to pronounce sounds, etc. Then you have Phonology, which is actually the study of “phonemes”, the tiny sounds that each language chooses. I explained that in a previous video when I was talking about sounds and the importance of learning them for when you learn a foreign language. And according to Phonology, usually phonemes are defined as the smallest unit of meaning in language, except that it’s not really meaning. It’s only because when you change a phoneme (so, one sound)… If I tell you “pet” and “pat”, I just changed the vowel, and yet, the meaning of the word changed. In that sense, they’re “the smallest unit of meaning”. They just change the meaning of a word as a whole. But I think you’re going to see in a minute that we can go deeper than that.

Then, there’s Morphology, which is how words are put together, how they are composed. A “morpheme” is also a chunk of meaning. So, usually you divide it into roots and other morphemes. Like, “possible” with the root “poss”, and then, “im-poss-ible”. “Im” would be a morpheme for negation, “ble” for “able”, etc.

Then you have Syntax. Everybody knows what syntax is, I think. It’s just the word order in a sentence. And then you have Semantics, so the meaning of phrases and sentences just as you read them or hear them. And then, Pragmatics is the language in context: just because you see a question, is it really a question, or is it an order? If somebody says “How happy to see you!”, does it really mean that, or are they being ironic? Etc. All that is Pragmatics.

I’m really simplifying the field of Linguistics, yes, but it’s just to get to this: Usually, you see the first four as the “form”, so anything that is the structure of the language. Then you have Semantics, the only part that deals with content, with meaning. And Pragmatics is, as I said, language in use, in context.

Well, I would argue that, actually, there’s a lot more content that gets ignored, a lot more meaning that is inside sounds. Sounds, and morphemes, because morphemes, the chunks of words, are composed of sounds too. And syntax too, because the way you structure a sentence can also change meaning.

So then, can sounds, the phonemes of each language, have meaning? I think they do. One of the famous experiments with this was done by an excellent linguist, Edward Sapir, in 1930. This is after centuries of ignoring the topic. Most linguists (I’ll talk about it in another series of videos to show you the progression of these thoughts) ignored the idea that any sound could have meaning. But Edward Sapir did a very, very easy experiment with hundreds of people:

He told them: “In a strange land, the words mil and mal mean ‘table’. Could you tell me which one is the big table, and which one means a small table?” Can you guess? Most people guessed, as you probably did, that mal was the big table.

Okay, no big deal. Maybe that’s a coincidence, right? Then, there’s another experiment (there are many like that): I’m showing you two words: takete and maluma. They’re both shapes, and one of them is spiky, and the other one is a rounded shape. Which one would you say is which? You probably guessed right again, or rather not right, but you guessed like the majority of the people. And you figured out that takete was the spiky one and maluma was the rounded one.

Well, if sounds didn’t have any meaning, then it’s a bit strange that you find these things universally agreed upon when in theory these words are random. I could have said the opposite, yet 90% of the people are choosing the same one. So, why? Well, maybe you could say “Oh, it’s because the /a/ is a big sound in your mouth, “aaa”. Therefore you associate it with a big table”. Yes, but the /a/ was here too, see? In takete. So it’s not quite as clear-cut. And /m/ and /l/ are more rounded, they have a rounded feel to them. Yeah, okay, maybe.

Maybe that’s why, but that’s it for now. I’m going to show you studies which I find fascinating, and which actually give you more concrete clues about why Socrates may not have been wrong, and sounds convey the essence of the object. So stay tuned! There’s going to be three different theories or three different works that I’d like to share with you, because they’re very little known, and I think that you’re going to find them fascinating to start exploring this topic. So, see you later for more.

What is a good translation? 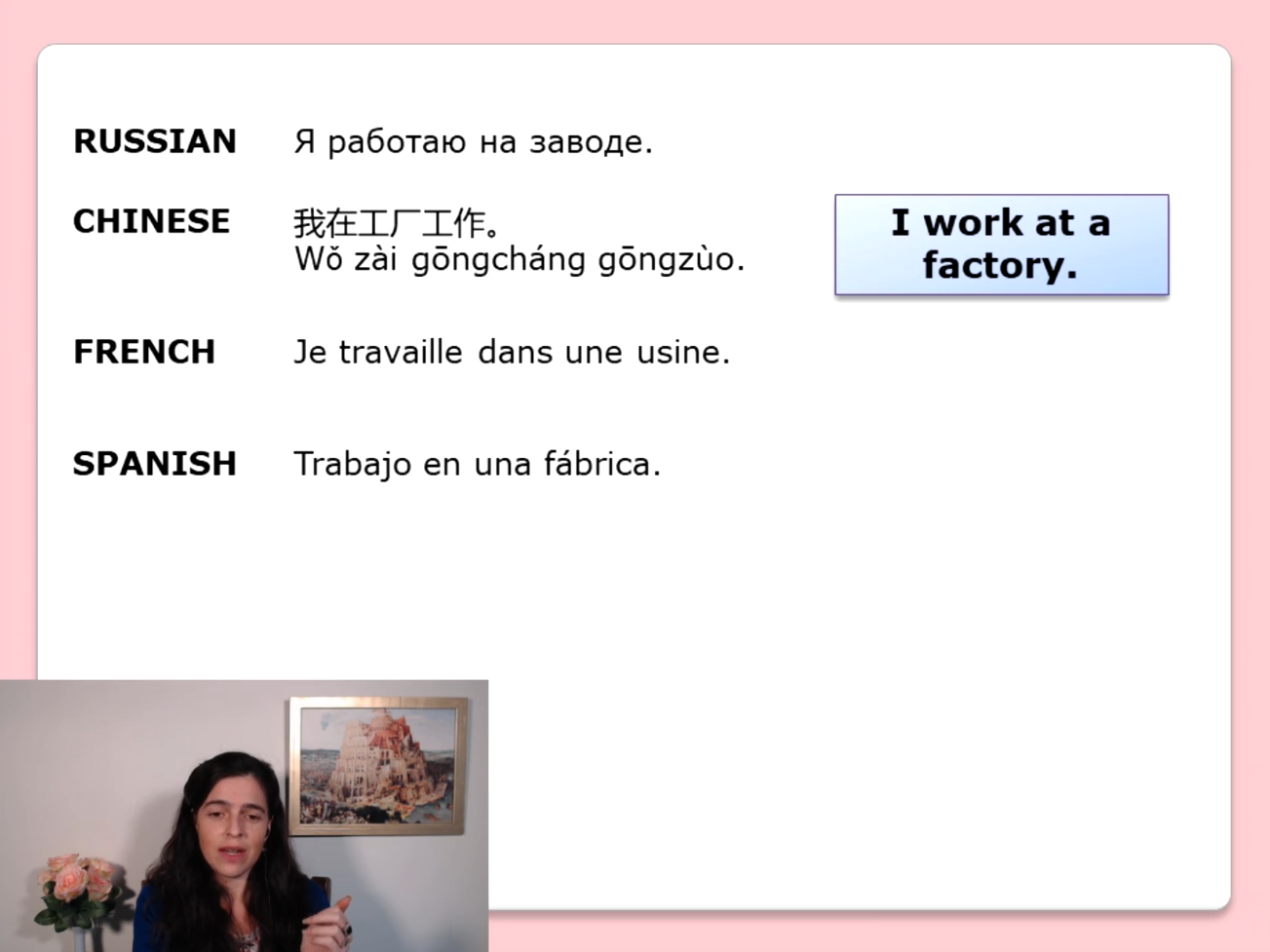 What is a good translation? At LingMost we make sure to provide the best quality!

In this two-part video, Juliana Barembuem, our Team manager, describes two different theories about translations (contrastive vs. interpretive), and why one is better than the other. It is addressed to translators, but also to anyone interested in languages.

No more boring translations, no more translations that read as if they had been done by an automatic translator. No more struggling with finding exact “linguistic correspondences” while forgetting that what matters is the message conveyed by the author. If you aren’t yet familiarized with the interpretive method, give it a try! It is more fun, it takes less time, and you will be happy about the results.

And about Danika Seleskovitch, who developed the Interpretive Theory of Translation:

We learned all the hard lessons so you don’t have to.

Services for expats and individuals

Moving to France and settling into a new life routine takes a lot of energy. We make sure you don’t get lost on the paper trail: we translate and accompany you where needed, assist with French bureaucracy, explain French language and culture and help you with a smooth transition in every way.

Things we can help you with

We offer consultation via Skype, email and phone. If you need us to accompany or represent you in person, we’re happy to do so in the Toulouse region.

Let’s get in touch:

We offer expat services for a live in France in English, Spanish, German, basic Russian as well as basic Chinese.

We’re looking forward to meeting you!

What people say about us

Welcome to WordPress. This is your first post. Edit or delete it, then start writing!